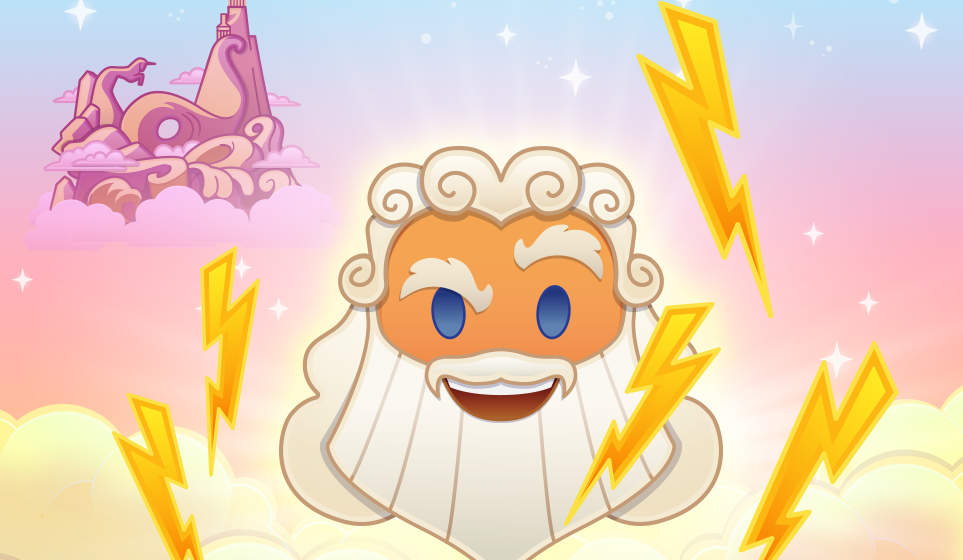 Hey Blitzers! Emoji Jenny here with another Emoji Highlight! This time it’s the lightning-loving, buff and beardy Zeus. On August 7th, we rolled out a Hercules Survival Event that brought him and Phil (also beardy, not so buff 😜) to our Emoji Collection. Zeus, as a new Rainbow Emoji, has a very unique power that zaps lines of Emojis with every match you make. This made creating him particularly interesting. I asked Andy, our Senior Game Designer, to share a behind the scenes look at how we achieved this!

What came to mind when brainstorming the power for Zeus?

We knew Zeus had to be mighty and full of lightning, but just putting Lightning Clouds on the board would be too simple for a god like Zeus. Here are some ideas we considered along the way:

What did our team land on as the final power for Zeus?

Ultimately, we wanted Zeus to have a godly presence above the board paired with a lightning effect. So we decided that while Zeus is above the board, every match you make for a limited time creates a lightning effect! Not only does this feel special and unique to Zeus, it was also great for destroying the Hydras during the Hercules Survival Event! We always try to make the Emoji powers relevant to the event type so that they feel helpful in addition to providing the x2 progress bonus when they are “Lucky”.

Were there any challenges in creating the Zeus Emoji? If yes, what were they?

We did face a few challenges in developing Zeus’s Emoji:

How did we solve the challenges?

Through the magic of playtesting and teamwork (it’s cheesy but it’s true 😊), we made a number of changes:

In the end, we think the Zeus Emoji came out great and that his power is worthy of a god in the world of Disney Emoji Blitz! 😁

By the way, if you want more information on what Rainbow Emojis are, check out my previous blog on the Emoji Collection here! We also have a bit more on our Customer Service site here!

Thanks for reading! We’ll leave you with our favorite quote from the thunder god himself in Disney’s Hercules:

“A true hero isn’t measured by the size of his strength, but by the strength of his heart.”

You are now leaving the Disney Emoji Blitz website.