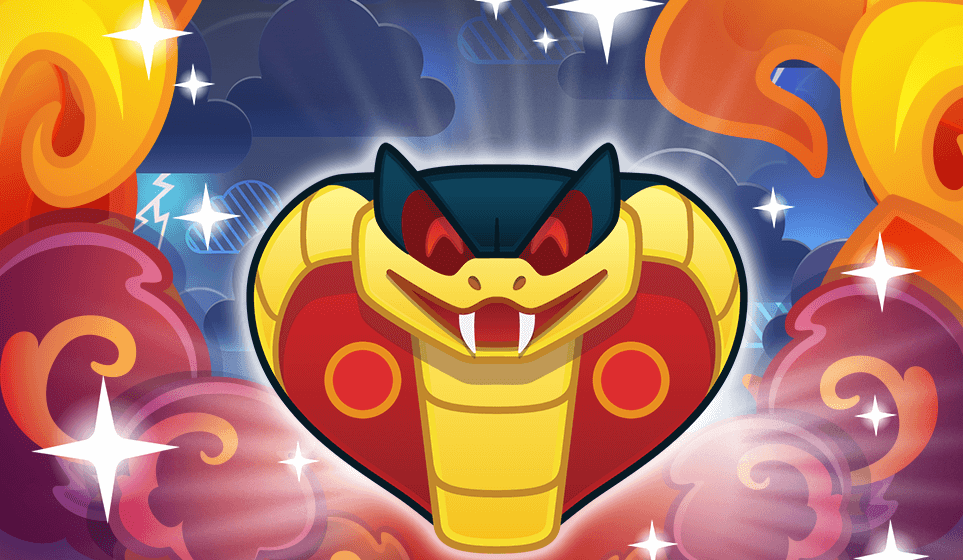 Happy New Year, Blitzers! Can you believe 2020 is over? Neither can we! We thought there’d be another month, like Jantember or something. But here we are in January 2021! To kick off the new year, let’s do another Emoji Highlight! We’re trying something new for our first new Emoji Villain of the year in Disney Emoji Blitz. New year, new beginnings after all! Allow us to introduce…Snake Jafar!

Remember this guy? Near the end of Aladdin, Jafar has Jasmine trapped in a sand timer. He turns into a snake to constrict Aladdin. Shortly after, Aladdin has the brilliant idea to take advantage of Jafar’s power hungry mindset. He tricks him into wishing to be a genie. Jafar transforms into a genie and gets sucked into the lamp! Aladdin’s wits save the day. Brains over brawn, right? The pen is mightier than the sword? OK, I think you get the point.

Snake Jafar is a new Story Emoji that can be added to your Emoji Collection today! Just play through our Snake Jafar Villain Event going on in-game through January 12. As I mentioned before, Snake Jafar is very new and very unique in a couple ways. Hence, I asked Andy, our Senior Game Designer, to spill the beans on what we did behind the scenes! (I rhymed that naturally…I hope you all are proud of me. 😜)

What is unique about the Snake Jafar Emoji?

So what’s extra awesome about our Emoji version of Snake Jafar is two things:

Why did we choose to make the Snake Jafar Emoji?

Well, we knew we wanted to explore Aladdin again, because who doesn’t love Aladdin? (It’s definitely one of MY favorites. I had the audio cassette tape! True story.) But the normal Jafar Villain has been around for a few years, so we thought, “How can we spice this up?” Since the advent of Story Emojis, we’ve wanted to do a Story Villain somehow. Then we thought, that Snake Jafar moment in the film is pretty spectacular! So this felt like an exciting way to explore that.

What came to mind when brainstorming the power for the Snake Jafar Emoji?

Here are some thoughts we had when brainstorming his power:

It’s always tough deciding on the direction for Villain designs because, when designing their power, we also have to consider the Player version of their power. An ideal Villain power is one whose visuals and animation can be applied to the Player version without having to change the game effect too much. The Villain power will always be an obstacle and the Player power will always benefit the player. However, we try to avoid making Villain and Player powers that are too different. It could create an inconsistent experience for the Player with that Emoji.

What did our team land on as the final power?

Two things that helped decide our direction were these important pieces from the film that really stuck out in our brainstorm:

Since we try to make our character powers as iconic as possible, those two notes felt key to designing this character in the game! Seeing that we wanted to do essentially two characters in one, we knew his power had to be simple, both for development sake and so he is intuitive to play against. We landed on the following:

I think that is all I have on our favorite new constrictor. I would throw in a pun or two, but Emoji Jenny might throw a hisssy fit. 😜 Join me in shedding 2020, and snake it easy this year, Blitzers!

By the way, if you want more information on what Story or Villain Emojis are, check out my previous blog on the Emoji Collection here!

You are now leaving the Disney Emoji Blitz website.